The Price of Ilúvatar's Gift? 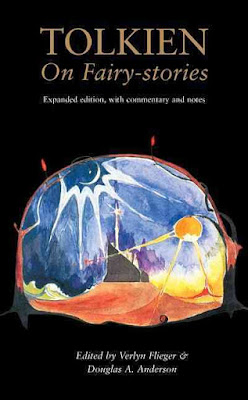 … fairy-stories are not in normal English usage stories about fairies or elves, but stories about Fairy, that is Faërie, the realm or state in which fairies have their being. Faërie contains many things besides elves and fays, and besides dwarfs, witches, trolls, giants, or dragons: it holds the seas, the sun, the moon, the sky; and the earth, and all things that are in it: tree and bird, water and stone, wine and bread, and ourselves, mortal men, when we are enchanted.

As interesting and lovely as this section of On Fairy-stories is, we seldom note its implication that mortal men are the only parts of creation not by nature a part of the 'realm or state' of Faërie. Enchantment alone brings us within its borders. But when we recall another passage in Tolkien where mortal men are also singled out as unique, the two together become truly fascinating.

‘But to the Atani I will give a new gift’ [said Ilúvatar]. Therefore he willed that the hearts of Men should seek beyond the world and should find no rest therein; but they should have a virtue to shape their life, amid the powers and chances of the world, beyond the Music of the Ainur, which is as fate to all things else; and of their operation everything should be, in form and deed, completed, and the world fulfilled unto the last and smallest.

So without the benefit of enchantment Men cannot inhabit Faërie, but for all those things and creatures that do, the Music of the Ainur is 'as fate.'  There is thus a dimension to the existence of Arda and everything in it that Men do not ordinarily perceive and in which they have no part. The 'being' of Men is not in Faërie, just as the being of the Elves is not beyond it. The existence of each has an element which the other does not share. Faërie lies parallel to whatever awaits Men 'beyond the world,'

It will be interesting to see where this might lead.