Many a reader has noted the effect the Ring has on Frodo when he looks upon Bilbo at Rivendell and at Sam in Mordor:

Slowly [Frodo] drew it out. Bilbo put out his hand. But Frodo quickly drew back the Ring. To his distress and amazement he found that he was no longer looking at Bilbo; a shadow seemed to have fallen between them, and through it he found himself eyeing a little wrinkled creature with a hungry face and bony groping hands. He felt a desire to strike him.


'No, no!' cried Frodo, snatching the Ring and chain from Sam's hands. 'No you won't, you thief!' He panted, staring at Sam with eyes wide with fear and enmity. Then suddenly, clasping the Ring in one clenched fist, he stood aghast. A mist seemed to clear from his eyes, and he passed a hand over his aching brow. The hideous vision had seemed so real to him, half bemused as he was still with wound and fear. Sam had changed before his very eyes into an orc again, leering and pawing at his treasure, a foul little creature with greedy eyes and slobbering mouth. But now the vision had passed. There was Sam kneeling before him ....


No one, as far as I can recall right now*, has remarked on what might be another instance of this same phenomenon. To be sure, it is easily overlooked, embedded as it is within Frodo's reaction to Boromir's actual attempt to seize the Ring. By contrast, Sam was not trying to take the Ring, and Bilbo, though yearning to see and touch the Ring again, reads Frodo's reaction and repents of even asking to see it so quickly, that it's hard to see his reaching for the Ring as hostile. Consider the following:

His fair and pleasant face was hideously changed; a raging fire was in his eyes.

Terror and grief shook [Frodo], seeing in his thought the mad, fierce face of Boromir, and his burning eyes.

So, perhaps we should see Frodo's perception of Boromir's face here in the context of his clearly Ring-induced perceptions of Bilbo and Sam, and allow that the image of Boromir's face that Frodo had in his mind was not entirely accurate. For, if Frodo sees threats to the Ring where there are none and momentarily perceives those he loves as evil creatures, will he not experience the same distortion of his vision when the threat is real, as it is with Boromir.

* Please let me know if someone has made this comment before. I would love to see it.
Posted by tom hillman at 12:21 PM No comments: Links to this post

Tehanu by Ursula K. Le Guin
My rating: 5 of 5 stars

I don't have enough stars.

View all my reviews
Posted by tom hillman at 9:49 PM No comments: Links to this post


Lately, as part of another project, I've been working very closely with Shelob's Lair and The Choices of Master Samwise in Book Four, and The Tower of Cirith Ungol in Book Six of The Lord of the Rings. There is so much to comment upon in these chapters, so many links among them as well as between them and other chapters that it would take a discussion of some length to lay them all out.(Working on it.) There is one connection I finally recognized last night that I found so charming that I wanted to say a few words about it.


In Shelob's Lair the narrator points out that Gollum 'had bowed down and worshiped her, and the darkness of her evil will walked through all the ways of his weariness beside him, cutting him off from light and from regret' (TT 4.ix.723). I had long felt that we have here an echo of the Twenty-Third Psalm: 'surely goodness and mercy shall follow me all the days of my life' (23.6). I became certain of this the other day when I noted that in the hymn which Sam, without knowing what he is saying, sings to Elbereth, he uses the word 'nguruthos' (TT 4.x.729), which Tolkien translates in Letter 211 (p.278) as 'the shadow of (the fear of) death'.* It is hard to imagine that a man of Tolkien's time, upbringing, and piety, did not intend another echo of the same psalm: 'yea, though I walk through the valley of the shadow of death' (23.4).

Since Galadriel plays an important role, at least in the minds of Frodo and Sam during the episode with Shelob, I had also been thinking of her gift to Frodo of the star-glass to be 'a light when all other lights go out' and of her appearance in Sam's vision out of a blaze of blinding light. This moment when the darkness of Shelob is debilitating both Frodo and Sam seems to have been foreseen by Galadriel and provided for with her gift. The interplay of the powers of light and darkness in this scene also reminds us of what Haldir said of Galadriel's power: 'In this high place you may see the two powers that are opposed one to another; and ever they strive now in thought, but whereas the light perceives the very heart of the darkness, its own secret has not been discovered. Not yet' (FR 2.vi.352; cf. 2.vii.364-65).

The other night I was reading aloud to a particular friend what I had been writing about all this. She immediately quoted the Gospel of John (1.5) 'and the light shines in the darkness, and the darkness cannot comprehend it'.

And, as happens at such moments of revelation, the circle suddenly closed.

Allusion, of course, is what we find here, not allegory. The echoes of the Latin 'comprehenderunt', are heard quite loudly in the English translation of John, but in Tolkien, more fittingly, they sound as dimly as the horns of Elfland. Yet sound they do. The light of the silmaril as borne by Eärendil and captured in the water of Galadriel's mirror does not suggest that she or Eärendil are Christ figures. Rather, it is a matter of all myths reflecting the 'true' myth (the evangelium), and of all uses of the imagery of light and darkness to represent good and evil having common elements. Our knowledge of the one shapes and enhances our understanding of the other. If anything, so many of the characters suggested as 'Christ-figures' in The Lord of the Rings simply underline the need for Christ, for Eru to enter his creation himself, because the Children of Ilúvatar, being fallen, cannot overcome the evil that is the cause and consequence of their own fall.


It is intriguing also to note that the Earendel whom Tolkien found in the Old English poem Christ (1.104), and who sparked the creation of Middle-earth, was understood by some to represent Christ and by others John the Baptist**. In either event, he is the morning star, who presages the sun and brings light and hope to those who 'have had to endure the dark shadow of death' (1.118: deorc deaþes sceadu  dreogan sceoldan), like Sam facing Shelob and like the speaker of the psalm.

Most interesting, finally, are the words of John the Evangelist*** who seems almost in dialogue with this question of who 'the Light' is, as if answering a question already raised during the lifetime of John the Baptist and Jesus -- some thought Jesus might be John come again, others that the Baptist might be the Messiah -- or anticipating that such a question would be raised again and clarifying the truth of the matter ahead of time (1.6-8):


* The parenthesis glosses the words before it, explaining them, not adding to them.

** See Cook The Christ of Cynewulf, a 1964 reprint of the 1909 impression, with the notes beginning on p. 88. Since identification of Earendel with Christ or with John the Baptist, except perhaps by Tolkien, is not relevant here, I have not engaged with scholarship later than Tolkien's discovery of him. Given Eärendil's role as the one who prepares the way for the (semi-)divine intervention of the Valar, Tolkien may have seen Earendel as more likely to be John the Baptist.


*** Coincidentally, perhaps, Tolkien regarded John the Evangelist as his patron saint (Letter 309), though the shared name was a coincidence.
Posted by tom hillman at 7:13 PM 6 comments: Links to this post

A couple of comments on The Inimitable Prancing Pony Podcast

On a recent episode (starting at 3:30) of The Prancing Pony Podcast, Alan and Shawn were discussing the question of whether the Ringwraiths had possession of their own rings or whether Sauron had them. Near the end Alan made an interesting point, to which I think I can add some support. Alan noted that on Weathertop Frodo could not see the rings of the Black Riders, even though the One Ring enabled him to see much about them that was invisible to everyone else present.

As Alan admitted, this is an argument from silence. But it becomes far more persuasive when we recall that Frodo could see Galadriel's ring when Sam could not, which she attributes specifically to Frodo being the Ring-bearer (FR 2.vii. 365-66). These two points together strike me as pretty compelling, especially when added to the other evidence that Sauron held the Rings of the Nine.

On another episode (starting at 1:34:00) a question arose about the scene in Rivendell in which Bilbo tries to touch the Ring and Frodo sees him momentarily as a Gollum-like creature whom he wishes to strike. I have just a couple of observations here and a question.

Posted by tom hillman at 5:47 PM No comments: Links to this post 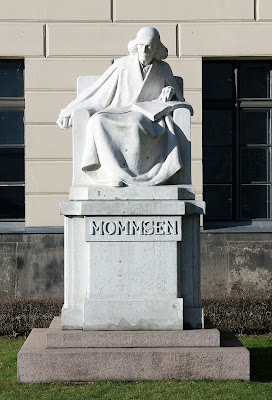 In few areas do the people of today feel inferior to their predecessors and ancestors. Paradoxically, or not, the most educated among us are most prone to perceive themselves inadequate in comparison to the scholars of times past. Who has not looked upon the vast sweep of the works of a Grimm or Mommsen -- let alone Ulrich von Wilamowitz-Moellendorf, Mommsen's son-in-law -- and wondered how they accomplished so much so well?

The Interdisciplinary Symposium of Berlin is pleased to announce a call for papers to be presented at its inaugural conference in April 2020. The topic will be:

Abstracts of no more than 150 words, not counting footnotes*, are to be laid at the feet of the statue of Theodor Mommsen at the Humboldt-Universität zu Berlin no later than tomorrow morning.

*Endnotes strictly forbidden.
Posted by tom hillman at 3:02 PM No comments: Links to this post