Review: The Flame Imperishable: Tolkien, St. Thomas, and the Metaphysics of Faërie

The Flame Imperishable: Tolkien, St. Thomas, and the Metaphysics of Faërie by Jonathan S. McIntosh
My rating: 5 of 5 stars

In letter 142 Tolkien says that "The Lord of the Rings is of course a fundamentally religious and Catholic work" and that "the religious element is absorbed into the story and the symbolism." Nothing could make how literally Tolkien meant 'fundamentally' as clear as Jonathan S. McIntosh's excellent study,The Flame Imperishable.

Review: The Inklings and King Arthur: J.R.R. Tolkien, Charles Williams, C.S. Lewis, and Owen Barfield on the Matter of Britain

The Inklings and King Arthur: J.R.R. Tolkien, Charles Williams, C.S. Lewis, and Owen Barfield on the Matter of Britain by Sørina Higgins
My rating: 5 of 5 stars

With the publication of J. R. R. Tolkien’s The Fall of Arthur, writes Sørina Higgins in her introduction to this volume, three truths became evident: that The Fall of Arthur is an important text worthy of study per se and for what it can add to our understanding of Tolkien and his legendarium; that in this work Tolkien draws on the significant cultural figure of Arthur whom many other British writers of his era found socially, morally, and spiritually relevant to their times; and that the coming of Tolkien’s Arthur also afforded the best opportunity for a study of the Arthuriana of the major Inklings. To illuminate these truths, Higgins has gathered twenty different scholars, herself not least, who turn their lights upon the Inklings and Arthur from a series of five different viewpoints. Through diversity in scholarly experience and choice of text, as well as in theoretical approach and theological perspective, this volume succeeds in all its goals. As often as scholars return to Arthur and the Inklings, they will return to this fine work.

Since intertextuality is integral to the entire concept of this book, the first section, “Texts and Intertexts,” quite properly begins with chapters that define terms (Higgins), review the history of Arthurian texts (Ordway), and demonstrate the lush web of significant connections between the Inklings and their sources as well as the among the works of the Inklings themselves (Dickieson). A splendid investigation of the place of Avalon as an evocation of the spiritual world that lies beyond ours reveals much about the ideas which Lewis, Williams, and Tolkien shared on the healing of the world and of ourselves (Huttar), while an initial exploration of Barfield’s Saving the Appearances leads to a provoking analysis of the role that myth, here in the form of the Grail, can play in helping us to regain a perspective on ourselves as part of a greater whole (Gaertner).

“Histories Past,” the second section, approaches the crossroads of myth and history that Arthur bestrides. For Lewis this crucial position revealed the struggle between the two; for Williams their coinherence meant that each affected the other; for Tolkien myth and history resonated together with spiritual truth (Imbert). Chesterton’s poems on Arthur similarly address the conflict between myth and history, which only the return of Christ will reconcile, and which takes place within the same broader context as Tolkien’s view of the Gospel as the Fairy-story that came true (Moore). The Fall of Arthur and The Lord of the Rings mythically reimagine the Middle Ages, constructing their perspective on nature, chivalry, and Christendom as a part of a cultural conversation with the Modernism of the Twentieth Century (Grewell).

“Histories Present” opens with a survey of the rise of Scientism, the prevailing intellectual culture of the Inklings’ time, and their responses to it, both their counterattacks on the narrowness of its vision, and their construction through Arthur of alternative moral visions (Jewell and Butynskyi). The Fall of Arthur subverts Arthurian myth by showing what harm the misappropriation of myth can do in the struggle between medieval community and individual domination, thus proving a dark foreshadowing of the central conflict in The Lord of the Rings (Drigger). In The Chronicles of Narnia Lewis seeks by quest and by healing the blighted land to recover from the despair inflicted by The Great War and mapped out in The Waste Land (Hooper). Through Arthur, often a racist or nationalist symbol, Williams holds up Otherness as a mirror in which we may see our own faults staring back at us, and mourns what humanity loses because of our attitudes towards the Other (Utter).

With “Geographies of Gender,” the scene shifts first to Tolkien’s Guinever, who, as heir to a mythic and literary tradition every bit as varied as Arthur’s, weaves together its Celtic and Germanic strands with the threads of Fate and Free Will, to create a figure embodying the transition from Britain to England, and challenging the notion that Tolkien’s female characters are lacking (House-Thomas). Charles Williams’s Arthurian poetry, with labyrinthine brilliance, seeks to advance his understanding of the City, or the Kingdom of God, through the essential interplay of Masculine and Feminine, but falters owing to its author’s troubled attitude towards women (Rasmussen). Similarly, in That Hideous Strength Lewis construes the Masculine and Feminine of the Spirit through the dual roles of Pendragon and Fisher King inhabited by Ransom (Shogren).

In “Cartographies of the Spirit,” the fifth section, we find George MacDonald mining the medieval revivalism of Victorian times to re-imagine contemporary notions of chivalry, seeking a moral way forward, not back, in which the true knight is the servant of all (Johnson). Similarly, in Williams’s Arthurian plays the choice of servitude brings freedom, another example of the paradoxical coinherence of the City of God, whose greatest expression is the Incarnation (Wells). War in Heaven shows the quest for the Grail to be more important than the Grail itself, because through the Eucharist it creates a communion of faith and experience (Bray). In Williams’s Arthurian poetry the Grail and the Eucharist again promise the union of Heaven and Earth, which may be achieved through service to the Grail, but the failure of Arthur and Logres is a failure to serve, thus causing the Grail to depart, but leaving still the promise of the Eucharist (Stout).

The literary Arthur, revised and re-visioned, is always a myth for its time, so Malcom Guite suggests in his conclusion to this volume. Through Arthur writers such as Malory and Tennyson addressed the spirit of their age. So, too, the Inklings. With a characteristically prophetic insight that seeks a recovery of vision, their Arthurs answer the despair and the marred self-image of the West since the First World War. That vision, that rex quondam, rexque futurus, is the mythic whole which we have lost that gives the parts meaning. In The Inklings and King Arthur Sørina Higgins has given us a study equal to its subject.

View all my reviews
Posted by tom hillman at 8:24 AM No comments: Links to this post 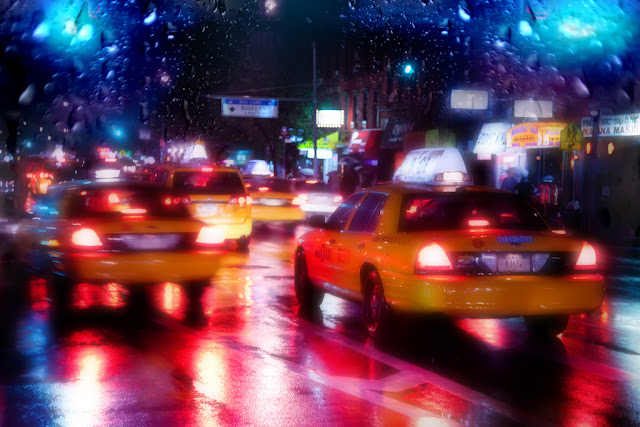 It was rainin’ hard in Frisco. I needed one more fare to make my night....

No, wait. That’s a different story. I’ll come in again.

Quite a long time ago I drove a cab in New York City for a few months. My favorite adventure among the many took place on a rainy Friday night in December about 2:30 AM. The dispatcher sent me to pick up a fare on a quiet residential street in a neighborhood in transition from one generation’s immigrants to the next.

As I pulled up, an elderly man emerged from the front door flanked by his wife and his adult son. They were helping him to stand. This did not bode well. When they got in the cab, I asked where we were going.

Me: You sure about that? It’s going to take me fifteen minutes to get there. We could get to Jacobi in half that time.

Woman: His doctor’s at Union. We go to Union.

Me, selfishly resolving that no way was this guy gonna die in my cab: Okay, fine. Hang on.

I jumped on the highway, drove much too fast, jumped off the highway, and ran probably a dozen red lights on my way to the hospital. I did slow down and make sure it was safe, but if the cops wanted to stop me, they could arrest me at the hospital.

We pulled in at the Emergency Room at Union Hospital in ten minutes.

Man, as the Woman and the Son were dragging him from the back seat: Give him a good tip!
Posted by tom hillman at 1:41 PM No comments: Links to this post