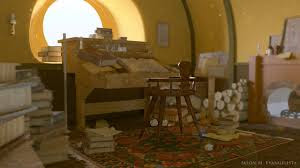 'Though [Bilbo] had found out that the thing needed looking after; it did not seem always of the same size or weight; it shrank or expanded in an odd way, and might suddenly slip off a finger where it had been tight.’

‘Yes, he warned me of that in his last letter,’ said Frodo, ‘so I have always kept it on its chain.’

While it would be nice to know how long ago Frodo received this letter, we can tell that it was one of at least two, and, since Frodo doesn't know where Bilbo is, there seems to have been no return or forwarding address included. (B. Baggins, c/o Master Elrond, The Last Homely House, Rivendell, Eriador.) Bilbo did not want to be found.

More importantly we see that, even though Bilbo felt better immediately after giving up the Ring, he continued to think of it for some time thereafter. So his asking to see it and attempting to touch it at Rivendell do not mark some suddenly renewed interest induced by the sight of it. Which is not to say he spent all his time thinking about it.

He also made a point of advising Frodo about how easily it could be lost if one took it for granted. How much of that is looking after Frodo, and how much the horror a Ringbearer would naturally feel at the thought of the Ring being lost? One never knows who might pick it up, after all.
Posted by tom hillman at 12:50 PM