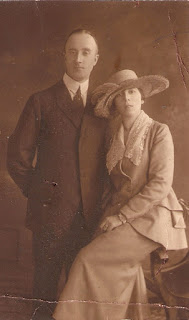 Tom is a native New Yorker and happy to be one.  His ancestors fled various, decent countries to come here, no doubt under less than ideal circumstances. For the most part they were Irish or German, and it's a fair sign of change that eventually one of the Irish Catholics married one of the German Protestants, and no one disowned anyone. Among Tom's ancestors were: a Canadian who fought in the US Civil War because he believed all men were created equal; teamsters who listened to Eugene Debs speak in Union Square before the Great War and who delivered Dutch Schultz's milk after they came back; a saloon-keeper who went underground with Prohibition; police officers, teachers, nurses, a jobbing Broadway actor; and a heartbroken, homesick grandmother who decided to go home to Ireland, but met a charming, dapper, dancing fellow on the ship, who kept visiting her in Swanlinbar, Co. Cavan, all the way from Co. Wicklow -- quite a journey in those days -- and wooed her back to New York.  This would be their wedding picture. Any looking-glass resemblance between this bit and the events of Colm Tóibín's excellent Brooklyn is entirely coincidental.

Tom grew up on stories and languages, since New York was and is all about stories and languages. Whether it was tales of New York baseball in its days of glory and smatterings of German passed down from his father, or tales of fairy mounds and banshees and bits of Gaelic from his grandmother, not to mention the whole history of Ireland from Cromwell (him) on down, or Latin and French from his mother and stories of the Great Depression and WWII nightly at supper. His family thus gave him a taste for words and languages and history and myths, which he has indulged through decades of studying Latin and Greek and a few other languages, most recently Old English. (Though he can't speak a single one of them.)  In the long ago -- would that be ἐν τῷ πάλαι? -- he wrote about the Late Republic -- the Romans', not ours -- and how we need to approach sources like Plutarch if we want to use them for History.  Now the world grows more hopeless and horrifying. If he has not turned his face to the wall quite yet, he has turned it from History. Once more he attends to Myth, where there is truth; and reads Beowulf and writes mostly about Tolkien.