'I guess that you have been having adventures, which is not quite fair without me.'

One of the more marked differences between the The Hobbit and The Lord of the Rings is the initial attitude of the main characters towards the prospect of 'adventure.' Bilbo, as we recall, responded quite unfavorably when Gandalf tried to recruit him for one:  'We are plain quiet folk and have no use for adventures. Nasty disturbing uncomfortable things! Make you late for dinner! I can’t think what anybody sees in them,' (Hobbit 12).  By the time that Frodo has reached the age at which 'adventure had suddenly befallen Bilbo' (FR 1.ii.43.), however, the tales of Bilbo's exploits have taught at least some of the younger hobbits connected to him to see things differently.  Merry (FR 1.iv.102, quoted above), Pippin (FR 1.iv.104), and Sam (FR 1.iv.99), all look gleefully forward to the adventure upon which they are embarking with Frodo, even is they also realize there must also be darkness and danger for it to be an adventure:

'Three cheers for Captain Frodo and company!’ they shouted; and they danced round him. Merry and Pippin began a song, which they had apparently got ready for the occasion.

It was made on the model of the dwarf-song that started Bilbo on his adventure long ago, and went to the same tune....
(FR 1.iv.106)

Frodo, however, who would love to go on just such an adventure as Bilbo's, is gloomily aware that his journey is quite unlikely to be one (FR 1.ii.62; cf. 1.iii.77, and note the capital A):


‘Of course, I have sometimes thought of going away, but I imagined that as a kind of holiday, a series of adventures like Bilbo’s or better, ending in peace. But this would mean exile, a flight from danger into danger, drawing it after me.

In fact Frodo fully expects his journey 'there' to have no 'back again' (FR 1.iii.66). Even so, neither he nor any of the others ever guessed that their adventures might involve fighting before Tom Bombadil handed them the swords from the barrow (FR 1.viii.146). Had Old Tom not rescued them, again, they would have all 'come to the end of [their] adventure' (FR 1.viii.140) then and there. All the hobbits then, including the more mature and sober Frodo, approach their journey with a certain naivete.

In keeping with this it is no surprise to find that in The Lord of the Rings 'adventure' overwhelmingly records or reports the attitudes of the hobbits towards Bilbo's journey or their own. Of the twenty-eight instances of the word, only twice does a character who is not a hobbit use it. Glóin does so, but he is speaking to Frodo of his experiences on the road to Rivendell (FR 2.i.228). Gandalf alone employs it of the exploits of those who are not hobbits, when he says rather grimly of the Dúnedain: 'It may be that this War of the Ring will be their last adventure' (FR 2.i.221), an assessment haunted by the prospect of no 'back again'.


It is also no surprise that after the Company leaves Rivendell, by which time even Sam's 'desire for adventure was at its lowest ebb' (FR 2.iii.280), the word occurs only four more times. The first three are quite matter of fact, without the least air of Adventure. Once the Company are discussing their 'adventures' with each other as they seek to decide whether to go to Mordor or Minas Tirith (FR 2.x.402). Merry and Pippin then speak of their 'adventures' when Treebeard bids them to tell him their tale (TT 3.iv.471). Frodo, too, narrates the 'adventures' of the Company when he meets Faramir in Ithilien (TT 4.vi.677). The journey to Rivendell, the seemingly hopeless quest begun there, the shattering loss of Gandalf, Boromir's near fall and his self-sacrifice, have forced a shift in perspective on the hobbits. To sit at Bilbo's feet as children and with kindling eyes hear him speak of the brave deaths of Thorin and Fíli and Kíli is one thing; to watch their friends and comrades die -- even die heroically -- is quite another. Now they have not only have they known adventure, but the loss that too often comes with it, even before they have reached the most challenging parts of their journey.

And it is precisely in the moment before Sam and Frodo plunge into the worst part of their adventure that the last use of word comes.

The brave things in the old tales and songs, Mr. Frodo: adventures, as I used to call them. I used to think that they were things the wonderful folk of the stories went out and looked for, because they wanted them, because they were exciting and life was a bit dull, a kind of a sport, as you might say. But that's not the way of it with the tales that really mattered, or the ones that stay in the mind.
(TT 4.viii.711, italics mine)

Their growth as characters is reflected in their evolving understanding of the very words they use. Step by step on their journey they leave behind both the conceptions they had, and the hobbits they were, when they began, which makes Sam's thoughts as he crosses the Brandywine for the first time seem almost prophetic:

Sam was the only member of the party who had not been over the river before. He had a strange feeling as the slow gurgling stream slipped by: his old life lay behind in the mists, dark adventure lay in front.
(FR 1.iv.99)

And, as is the way of prophecy, he had no idea how true it was.

As many are aware, Tolkien derived the name 'Saruman' from Old English. The entry in Bosworth- Toller for searu starts with ambiguity (I.) and moves straight to the 'bad sense' (II.). The good sense (III.) comes in a distant and by comparison feeble third, all the examples of which are adverbial uses of the instrumental case. searwum, 'skillfully, ingeniously, with art'. Amid the wealth of marvelous, damning examples under sense II. we find right near the end of the section a quote from the Blickling Homilies (173.8) in which St. Peter tells St. Paul of Simon Magus and recounts 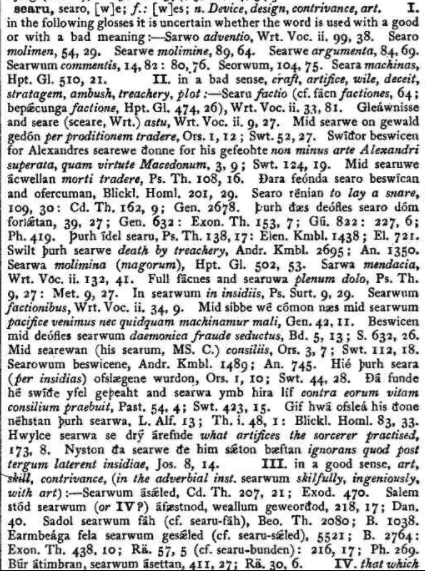 So while it is true to say that searu can be either negative or positive, the surviving evidence indicates that negative is the far more common meaning. When we also consider that the word is so frequently ambiguous that this uncertainty merits the first place in the dictionary entry, it seems a fitting source for the name of a wizard who, even as his 'wickedness' was 'laid bare' (TT 3.ix.567), had proclaimed himself no longer Saruman the White, but 'Saruman of Many Colours' (FR 2.ii.259):

'I looked then and saw that his robes, which had seemed white, were not so, but were woven of all colours, and if he moved they shimmered and changed hue so that the eye was bewildered.'

Since Tolkien named him Saruman from his first appearance in his plot outlines (Treason 70, 72-73), his character and his fate were coeval with his name.

Posted by tom hillman at 10:09 AM 3 comments: Links to this post