The Dark Lord's Bread and Butter -- 'He'll eat us all' 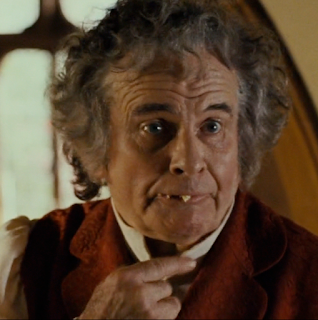 'Don't take the Precious to Him! He'll eat us all, if He gets it, eat all the world.'

Whether by chance or by design two prominent traits of Hobbits converge in Bilbo's likening of himself at the Ring-enhanced age of eleventy-one to 'butter that has been scraped over too much bread' (FR 1.i.32). The first is of course the Hobbits' well-known love of food. The other is their habit of jesting about serious matters. As Merry says to Aragorn in The Houses of Healing

'But it is the way of my people to use light words at such times and say less than they mean. We fear to say too much. It robs us of the right words when a jest is out of place.'

What makes this fascinating is that in The Shadow of the Past, the very chapter after Bilbo makes his comparison, we find Gandalf comparing the action of the Ring and of Sauron himself to eating and devouring no less than four times (FR 1.ii.47, twice on 55, 57). We find the same in Faramir's description of what had happened to the nine men given Rings of Power by Sauron: 'he had devoured them' (TT 4.vi.692); and elsewhere he calls Sauron 'a destroyer who would devour all' (TT 4.v.672). And as we saw in the quote with which I began, Gollum, too, saw things in similar terms. It's not often Gandalf, Faramir, and Gollum agree.

Given all this, Bilbo's choice to compare himself to food is even more psychologically revealing than at first it seems, which makes its presence here a matter of chance, if chance you call it.

I would very much like to thank Joe Hoffman and Corey Olsen for the friendly banter which we engaged in on the subject of Hobbits and butter, and which in turn led me to this reflection.

It Comes in Slabs? Hobbits and Butter

‘Why, I feel all thin, sort of stretched, if you know what I mean: like butter that has been scraped over too much bread. That can’t be right. I need a change, or something.’
(FR 1.i.32)

What reader of Tolkien doesn't know Bilbo's famous simile? And who doesn't recall it on that morning years later when Pippin is shocked (shocked!) at the short commons of besieged Minas Tirith?

Pippin looked ruefully at the small loaf and (he thought) very inadequate pat of butter which was set out for him, beside a cup of thin milk. 'Why did you bring me here?' he said.
(RK 5.iv.806)

But how many of us -- I'm looking at you, Joe Hoffman -- have ever wondered if we could quantify just how much butter a hobbit would deem adequate?

They were washed and in the middle of good deep mugs of beer when Mr. Butterbur and Nob came in again. In a twinkling the table was laid. There was hot soup, cold meats, a blackberry tart, new loaves, slabs of butter, and half a ripe cheese: good plain food, as good as the Shire could show, and homelike enough to dispel the last of Sam's misgivings (already much relieved by the excellence of the beer).
(FR 1.ix.154, emphasis added)

Houses of Mirth and Lamentation


A cold voice answered: 'Come not between the Nazgûl and his prey! Or he will not slay thee in thy turn. He will bear thee away to the houses of lamentation, beyond all darkness, where thy flesh shall be devoured, and thy shrivelled mind be left naked to the Lidless Eye.'

A sword rang as it was drawn. 'Do what you will; but I will hinder it, if I may.'

'Hinder me? Thou fool. No living man may hinder me!'

Then Merry heard of all sounds in that hour the strangest. It seemed that Dernhelm laughed, and the clear voice was like the ring of steel. 'But no living man am I! You look upon a woman. Éowyn I am, Éomund's daughter.


(Okay, this post is going to be nowhere near as charming as Jerry Burns' Mathom-House post from a couple of days ago.)

The houses of lamentation just sound so KJV, and Dernhelm's laughter is like something out of a Viking saga. (See Tom Shippey's marvelous new book, Laughing Shall I Die: The Lives and Deaths of the Great Vikings.) But it's the juxtaposition of the two, and the Witch-king's calling her a fool that has long made me wonder if there was something else Tolkien was playing off in this scene besides Macbeth.

The notion struck me when I first read one of my other favorite books, Edith Wharton's The House of Mirth, the title of which comes from Ecclesiastes 7.4. The KJV renders this verse:

If Tolkien is recalling the Bible here, he is using it expertly and ironically to undercut the Witch-king. For of course he is the fool here, not Éowyn who will have the last laugh when she finds happiness in the Houses of Healing.

Posted by tom hillman at 5:04 PM No comments: Links to this post 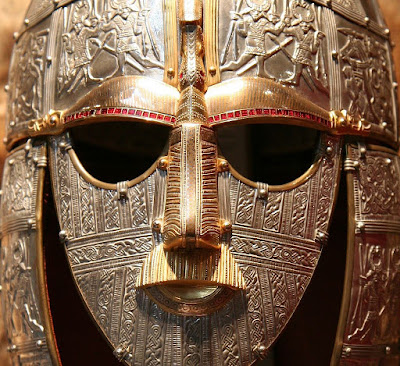 I've been re-reading Beowulf lately, my second time through the poem in Old English. It brings joy and laughter to my geeky soul, not least because somehow it got easier between the first and second readings. Of the many things that have delighted me, I wanted to mention lines 1419b-1423. Not only are they a great example of the things you can do with word order in an inflected language, but what they do here in particular is funny.

Just a bit of background first. Beowulf has killed Grendel and Grendel's mother has come looking for revenge. She breaks into Heorot in the middle of the night and carries off Ӕschere, one of king Hrothgar's most trusted advisers. The next morning a posse of Danes (Hrothgar's folk) and Geats (Beowulf's) sets out for the lair of Grendel and his mother.

For all the Danes it was,
for the friends of the Scyldings*, a pain in their hearts
to endure, for many a thane,
a grief for every warrior, once they
found Ӕschere's head on the sea-cliff.

Richard Rohlin was just talking the other day over at Blog on the Barrow-Downs about ways in which the Beowulf poet builds tension in a story that most of his audience would have known. It's an excellent post which I encourage you to read for its discussion of shifting perspectives within the story. Here and now, we're on a much smaller scale, an elegant and balanced little sentence that withholds the crucial piece of information until the very end, poor Ӕschere's head, the twenty-first of twenty-two words.

Here's what you might call an exploded view, which aims to make clear how nice a sentence this is:

For all the Danes
it was
for the friends of the Scyldings
a pain in their hearts to endure
for many a thane
a grief
for every warrior
once they found Ӕschere's head on the sea-cliff.

All of the phrases beginning 'for' are interlaced with the verbal structure of the sentence, while 'grief' is in apposition with 'a pain...endure.'

It's like a walk down a long dark hallway in a horror movie. You know something bad is coming, just around the next corner, and somehow it still takes you by surprise when you finally get there. Richard Rohlin and I also both got a laugh out of the fact that in the Old English Ӕschere is quite literally separated from his head.

*The Scyldings were the dynasty that ruled the Danes in Beowulf. 'Friends of the Scyldings' is synonymous with Danes.
Posted by tom hillman at 11:04 PM 3 comments: Links to this post

The Annunciation and the Swan 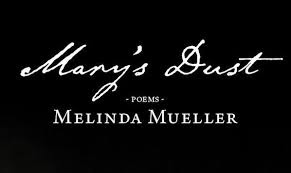 A friend recently lent me a book of poems called 'Mary's Dust', by Melinda Mueller. Each of the poems treats the experience of a different character named Mary. Unsurprisingly, the first poem is about the Virgin Mary, and it's quite lovely:

The air before her congealed
and became the angel, blazing.

Its robes streamed and whirled
in a wind that filled her ears.

Through its transparent form
she could see the brown hills

And stunted trees beyond, magnified
and trembling like flames.

She could not have told
what was said. That story was

conceived years later, by men
who had not been there.

Afterwards the stirred dust
settled around her feet with a faint

ringing, as if it were the dust
of a thousand bells.

Mueller evokes so much here by allusion. In 1 Kings 19 Elijah in despair flees into the wilderness, where he witnesses a whirlwind, an earthquake, and a fire, but knows that God is not in them. Then after the fire he hears a 'still small voice' and knows that it is God. We never hear what that voice is saying in that moment. Perhaps, like Mary, Elijah 'could not have told / what was said.' Perhaps for him, too, it rang in the dust for him that settled about his feet. Perhaps it was a voice that did not speak in words, and so its words could not be told.


But it was to another poem that the ineffability of the angel's conversation turned my thoughts. As soon as I read those words I thought of the end of Yeats' Leda and the Swan. When the human and the divine meet in this way, or in any way that could be called a union, what can be told? What can be said? Could we ever hope to find the words to describe what we knew in that moment?


A sudden blow: the great wings beating still
Above the staggering girl, her thighs caressed
By the dark webs, her nape caught in his bill,
He holds her helpless breast upon his breast.

How can those terrified vague fingers push
The feathered glory from her loosening thighs?
And how can body, laid in that white rush,
But feel the strange heart beating where it lies?

A shudder in the loins engenders there
The broken wall, the burning roof and tower
And Agamemnon dead.
Being so caught up,
So mastered by the brute blood of the air,
Did she put on his knowledge with his power
Before the indifferent beak could let her drop?


Posted by tom hillman at 1:21 PM No comments: Links to this post

Death and Immortality in Middle-Earth: Peter Roe Series XVII by Daniel Helen
My rating: 3 of 5 stars

There are quite a few interesting thoughts and perspectives here, and several good articles. Unfortunately, there are also lots of typos, and sometimes a lack of perfect fluency in English idiom obscures an author's meaning. (No doubt I would do no better if I chose to write an article in a language other than English.)

View all my reviews
Posted by tom hillman at 8:21 PM No comments: Links to this post