Things You Find In Grammar Books 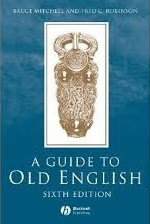 From A Guide to Old English, sixth edition (2001) by Bruce Mitchell and Fred C. Robinson.

...the O[ld] E[nglish verb distinguished only two tenses ... the present and the preterite. Hence ... the two simple tenses are often used to express complicated temporal relationships. This is one of the things which made Professor Tolkien once say in a lecture that most people read OE poetry much more quickly than did the Anglo-Saxon minstrel, reciting or reading aloud as he was to an audience which needed time to pick up the implications of what he was saying. And this would apply, not only to the subject-matter, especially to the hints and allusion which frequently had great significance, but also to the relationship between paratactic sentences ... and to the actual relationship in time between two actions both of which were described by a simple tense of a verb.


Conditions expressed by the word-order V[erb].-S[ubject] without a conjunction -- e.g., 'Had I plenty of money, I would be lying in the sun in Bermuda' -- occasionally occur in OE prose.
(99)


A sentence clearly composed in winter by someone not getting rich from writing an Old English grammar.

'and the Lord of Hosts also knew that things would turn out badly between Adam and me about that heavenly kingdom, if I had control of my hands.'

...[the sentence] here might refer to something which is impossible at the time when Satan spoke -- the implication being 'if only I had control of my hands now, but I haven't'. But it could also be translated 'God knew that trouble would arise between Adam and me if I were to have control of my hands'.

.... Does this interpretation mean that there was a possibility that Satan might have control of his hands ... or that such a thing was impossible when God spoke? The issue here is complicated by questions of God's foreknowledge, though perhaps our own knowledge of the story enables us to dismiss the latter possibility. But enough has been said to make it clear that the Anglo-Saxon 'rule' that 'unreality is timeless' is not without its advantages.
(109, emphasis added)


Nothing, and I mean nothing, screws with the mood of a verb like questions of divine foreknowledge. Had Apollo only used the subjunctive, Oedipus might have been lying in the sun in Bermuda.