Getting to the Bottom of Celeborn 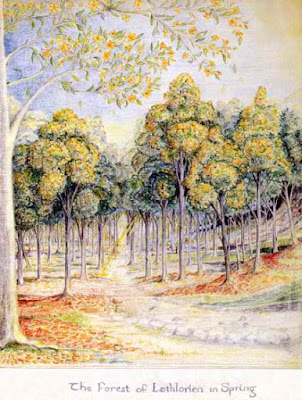 'An evil of the Ancient World it seemed, such as I have never seen before,' said Aragorn. 'It was both a shadow and a flame, strong and terrible.'

'It was a Balrog of Morgoth,' said Legolas; 'of all elf-banes the most deadly, save the One who sits in the Dark Tower.'

'Indeed I saw upon the bridge that which haunts our darkest dreams – I saw Durin's Bane,' said Gimli in a low voice, and dread was in his eyes.

'Alas!' said Celeborn. 'We long have feared that under Caradhras a terror slept. But had I known that the Dwarves had stirred up this evil in Moria again, l would have forbidden you to pass the northern borders, you and all that went with you. And if it were possible, one would say that at the last Gandalf fell from wisdom into folly, going needlessly into the net of Moria.'

'He would be rash indeed that said that thing,' said Galadriel gravely. 'Needless were none of the deeds of Gandalf in life.'
(FR 2.vii.356)

For his words here Celeborn earns a gentle rebuke from Galadriel. Her words are third person (he) rather than second (you), and all very politely subjunctive, 'would be' rather than 'is/are', leading to a generalization about a type of person ('that said') rather than a precise comment about a specific individual ('who said').  As such, Galadriel's statement neatly answers the two unreal conditional statements ('had I known.... And if it were possible') with which Celeborn responded to the news of the balrog and the death of Gandalf. In essence, she is saying that Celeborn, appearances notwithstanding, is not the sort of person who would say such things.

And though he accepts her reproof and apologizes at once, readers have been far less forgiving than Galadriel and the members of the Company. Indeed Celeborn is seen as something of a dolt, whose folly here wholly belies Galadriel's statement, only a few moment later, that he is 'accounted the wisest of the Elves of Middle-earth' (FR 2.vii.357). Since he plays little other role, and since the attention shifts almost completely to Galadriel, the rashness of his remarks, spoken 'in the trouble of my heart', is never redeemed. We never get to see the wisdom of which Galadriel speaks. So, readers have long wondered just what it is she's talking about. Indeed Celeborn's wisdom seems chiefly to consist in having married Galadriel.


His words and his apology, I would argue, are meant to have a different and a greater effect than a first glance suggests. They aim to reveal how frightening a balrog is, even to the wisest Elf and to indicate how troubling the fall of Gandalf is with the fate of Middle-earth hanging in the balance. Consider the reaction of the otherwise dauntless Legolas, whom the balrog so 'filled...with terror' that he dropped his arrow and cried out in 'dismay and fear' (FR 2.v.329). By contrast, when the Company later encounters the winged Nazgûl the 'sudden dread' Legolas and the others feel does not prevent him from shooting it from the sky just as 'suddenly' (FR 2.ix.387). Aragorn himself, moreover, calls the balrog 'terrible', which he means quite literally, that is to say, it inspires terror; and to Gimli it is Durin's Bane, a race-nightmare of which he speaks with 'dread in his eyes.' It was, as Gandalf said, 'a foe beyond any' of them, and its power posed a serious challenge to his own (FR 2.v.327, 329-331). Small wonder, then, that at the bridge he chose to declare himself.

We must also recall that Aragorn seems to have broken off his account at 'the coming of the Terror,' that is, before the battle at the bridge, in order describe the balrog. This exactly parallels the narrative of events, which pauses to do the same once the balrog comes into view. (FR 2.v.329-330). The Terror which so dismays Legolas that his courage briefly falters at that moment, has its match in the lapse of Celeborn's wisdom in this one. It may also be, given Aragorn's apparent pause in telling the tale, that Celeborn does not yet know that Gandalf threw the balrog down into the abyss, apparently killing it. He may know only that Gandalf saved his companions and perished himself. His '[h]ad I known that the Dwarves had stirred up this evil in Moria again' makes more sense if he does not know that the balrog also fell.  If Gandalf is dead and a balrog is on the loose, that would be a very troubling situation indeed. Nor is Celeborn alone in questioning the wisdom of entering Moria. Aragorn also thought it folly, and warned Gandalf against it (FR 2.iii.286-87; iv.297; vi.333).


But if a close reading provides us a context in which Celeborn does not seem entirely dim, we still never encounter any evidence that allows us to consider him 'the wisest of the Elves of Middle-earth.' If anything, the surefooted grace with which Galadriel steps in to save the situation, gently but firmly correcting her husband and simultaneously winning the heart of a 'glowering' Gimli with her generosity and charm, makes her appear wiser by far than Celeborn.  And everything we see of her hereafter tends only to reinforce this opinion of her wisdom: her power in creating Lothlórien and defending it from Sauron, her humility in refusing the Ring when Frodo freely offers it, and her willingness to let all she loves fade in defense of all else.  In short nothing Celeborn does or says, and nothing anyone else says of him, allows us to reconcile Galadriel's description of him with the impression he initially creates in the reader of not being particularly wise at all.

In part, as I have said, this has to do with the subtlety of the context, which would of course have been plain as day to the man who wrote it. An author's intent is not always perfectly realized on the page; and even if it is, it is not always fully or easily appreciated by readers. In part it also has to do with the way the text developed. Once introduced into the narrative the Lady of Lothlórien quickly became more important than the Lord (The Treason of Isengard 233-66). The combination of the subtlety of the context and the transition from Lord to Lady did Celeborn no favors.


Yet there may be one more small aspect of the portrayal of Celeborn and Galadriel that we need to consider briefly. It's possible that Tolkien was having a bit of fun with us. We have seen him do this before. At FR 2.iv.298 we have seen him play with the tale of Odin being swallowed by Fenris Wolf. At 1.x.171 he plays with Shakespeare's 'fair is foul and foul is fair' in contrasting the apparent and the real characters of Strider (Macbeth 1.i.10). At TT 4.viii.714 he plays with 'the lean and hungry look' of Cassius in Julius Caesar (1.2.193-96). In larger and more forceful ways at TT 3.iv.484-87, ix.564-69 and RK 5.vi.840-42 he amuses himself with 'Birnam Wood' and 'none of woman born' (Macbeth 4.1.95-96, 108-110; 5.5.31-36, 8.9-16).  I would also argue that the vision of the Kings and Chieftains of the Dúnedain which Bombadil conjures for the hobbits (FR 1.viii.145-46) owes much to the third prophecy -- the vision of the line of Stuart Kings (Macbeth 4.116-140) -- in that same scene in Macbeth which gives us Birnam Wood and 'none of woman born'. But it is never a mere echo of Shakespeare or Norse Myth. Gandalf is not Odin. Strider is not Macbeth. Gollum is not just thin as starvation, but no more to be trusted than Cassius. The wood really does march to war. And the Witch-king is slain by two people, one not a Man, and the other not a man.

So where might we find a fairy queen in an enchanted wood who is mistaken about the wisdom of her beloved? In A Midsummer Night's Dream of course, where Titania, under an enchantment, falls in love with Bottom. 'Thou art as wise as thou art beautiful', she tells him (3.1.140). Since Puck has just given Bottom, 'the shallowest thickskin of that barren sort' (3.2.13), the head of an ass, Titania is clearly out of her reckoning. Bottom is of course neither wise nor Titania's husband, but Titania's folly is also brief and presently Oberon, her spouse, recalls her to her senses.

Of the points I have made here the one I am most serious about, and most convinced of its value, is the first part of the point about the context in which we need to read this scene. The second part, about the seeming pause in Aragorn's account has to contend with the quite reasonable objection that Celeborn asked to be told 'the full tale', and Aragorn seems to set out to do just that. While I believe that it can contend with that objection, not everyone may be convinced.  And I do think that Tolkien probably is having a bit of fun here, playing Titania and Bottom against Galadriel and Celeborn, but if so it is a mere whiff of a joke meant to underscore the seriously troubling situation that Celeborn believes confronts him.*

*I will admit that this connection between Tolkien and Shakespeare actually came to me in a dream on or about Midsummer. Blame it on Puck then.
Posted by tom hillman at 12:49 AM