As One That Returneth from the Dead (The Lost Road V.283) 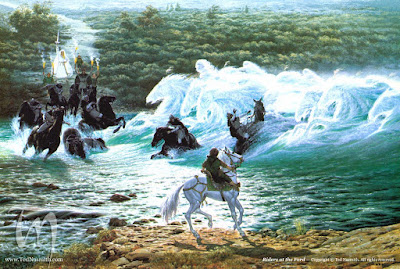 Recently I was listening to Mythgard's podcast on The Lost Road and I was struck by the following passage:

Maidros the chief of Fëanor's sons did deeds of surpassing valour, and the Orcs could not endure the light of his face; for since his torment upon Thangorodrim his spirit burned like a white fire within, and he was as one that returneth from the dead, keen and terrible; and they fled before him.
(Lost Road V.283)

While the podcast engaged in a very interesting discussion of the effect of 'returneth' here versus 'returns' in the parallel passage of The Silmarillion (152; podcast time index 1:07:00), it's actually the two comparisons together -- of Maedhros' spirit burning 'like a a white fire within' and of Maedhros himself to someone returned from death -- added to the result 'that the Orcs could not endure the light of his face' and 'fled before him' that led me to think of another character who in fact had died and come back.

Not Gandalf, as one might first guess, but Glorfindel:


With his last failing senses Frodo heard cries, and it seemed to him that he saw, beyond the Riders that hesitated on the shore, a shining figure of white light; and behind it ran small shadowy forms waving flames, that flared red in the grey mist that was falling over the world.

The black horses were filled with madness, and leaping forward in terror they bore their riders into the rushing flood. Their piercing cries were drowned in the roaring of the river as it carried them away.
(FR 1.xii.214-215)

Clearly, in describing Maedhros, Tolkien has a very definite idea of what 'one that returneth from the dead' would be like, and Glorfindel seems to fit that bill. Not only do the Ringwraiths flee before him here, but they did so even when he met them alone (FR 1.xii.210; RK App. A 1051).

The natural objection to this is that it wasn't until much later that Tolkien settled the question of whether the Glorfindel of Rivendell was Glorfindel of Gondolin reincarnated  (Yes, he is.) Indeed he discussed the matter in two separate essays composed over thirty years after he had written of Glorfindel of Rivendell (Peoples XII.377-382). Yet, as Christopher Tolkien points out, in 1938 Tolkien certainly regarded them as the same (Return VI.214-15; Peoples XII.377), and that's what is relevant here. Tolkien's portrayal of Glorfindel in The Lord of the Rings comes out of a period in which he was working on and giving great thought to the Quenta Silmarillion, where the passage on Maedhros appears. So in the comparisons he makes for Maedhros we may see well  some of the reality he imagined for Glorfindel in particular and perhaps for reincarnated Elves in general.

Email ThisBlogThis!Share to TwitterShare to FacebookShare to Pinterest
Labels: Glorfindel, J. R. R. Tolkien, Mythgard Academy, The Lord of the Rings, The Lost Road, The Silmarillion